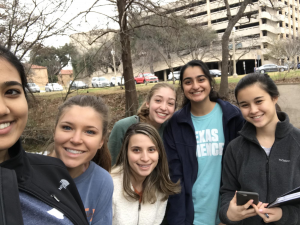 Something that really intimidated me about the stream was the coding portion–developing apps throughout the semester. I was nervous going into it because I have exactly 0 prior coding experience, and it’s an intimidating thing to go through for the first time, especially since some of my fellow stream members already had some experience with coding. I definitely learned a lot through all the app assignments, and there was a lot of trial and error before I got each app to do what I wanted it to do, but the whole process was a really great learning experience. Plus, despite the struggle it took to get my apps to work, the sense of accomplishment I felt when I actually did get them to work was honestly unparalleled. I’d advise any prospective DIY students to not let the coding aspect of the stream intimidate you. Despite not having any experience prior to joining the stream, I was able to learn a lot about coding. Though a frustrating process, it really is a great way to learn a new skill.

Something that I really enjoyed in the DIY stream was the skill development that we did with 3D printing. It was honestly so cool to me that we were able to use 3D printers in the lab–especially because 3D printers are such a great tool to be able to do diagnostic research. I ended up printing a pendant with a trident on it for my little sister–and she was over the moon when I told her about the 3D printing process and how I got to do that in my research lab. The number of  “Oh my gosh, this is SO COOL!”s that I got from her was honestly really encouraging a good reality check for me–the stuff we were doing in lab really was cool

The stream definitely changed the way I thought about research as a whole. Especially as a freshman, I had definitely fallen victim to the mentality that real research was something that only people with PhD’s or a lot of training were qualified to do. But once we got the results back from our Waller Creek skill development and we found out that we had identified a major source of contamination for the creek, I realized that what we were doing in the stream actually was real research. We, as tiny little freshman with very few skills outside of what we learned in DIY, were able to use those skills and knowledge and produce data through experimentation that actually led to a difference. I think that was honestly one of the coolest moments, for both me as a student in DIY, as well as just a student in general–knowing that something I had done, even without a PhD or significant training, had had an impact, was a surreal moment. My experience in DIY has taught me a lot about research, both in skills and the mentality that I have about it, and I think it’s a great opportunity for anyone looking to get into research.