There are hundreds of different programs and organizations within the University of Texas. FRI falls within those, but out of the 42 research streams, there is only DIY Diagnostics. As a first year, I was afraid of making a mistake. I was afraid I was going to choose the wrong stream, but honestly, the FRI streams are all substantial and special. There was no wrong choice to be made. I chose DIY because it caught my eye, and I was so intrigued about the DIY pregnancy test that they had created. I walked around the rest of FRI stream fair, but no matter where I was standing, I caught myself looking over at the DIY booth.

When I was accepted into the DIY stream, it was a feeling of relief and extreme happiness. Not only was I a part of the nation’s largest undergraduate research program, I was at the stream that my heart wanted. The beginning of my DIY journey was extremely rocky. It was new territory for me for sure. I thought I was going to be completely lost and fall behind, but DIY is a family. We were allowed to work together which made assignments less stressful and allowed us to grow strong bonds with one another.

Along with doing assignments that taught us lab skills, we also learned how to code mobile apps. Honestly, most of us had little to no experience in coding, so we were all in it together. We struggled a lot, but it made the success of coding an app feel like the biggest sense of accomplishment. Throughout the spring semester, we got better at coding with all of our resources. We were given access to CodeAcademy and a mentor who was a computer science major which helped a lot. I think one of the funniest moments when coding was sitting for an hour with one of my peers trying to find a mistake in my code. It sounds awful, and it definitely was. As frustrating as it was, we just couldn’t stop cracking up about how the code was perfectly written, but we didn’t notice it was in the wrong coding section. Although I felt like a big idiot, I could breathe again because I finished the app.

There are many things that I have learned in DIY. The most valuable thing I learned was how to prioritize and time management. The best thing was how understanding Dr. Reidel was. He understood that we would need extensions or that assignments could go completely wrong. Also, he understood how we have lives outside of the lab such as other classes and exams on top of the hours we spent a week within the lab. I am thankful for that. When I look back at my college memories, I will remember my time with DIY Diagnostics. 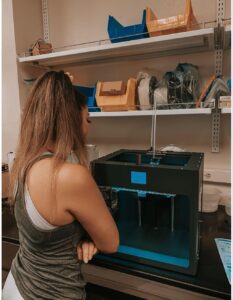