When I was deciding which stream I wanted to join, I considered whether the lab was well-rounded in the type of skills taught and the kind of work done. I wanted a lab that was fun and would teach me skills people would find interesting. As a stream that focuses on creating inexpensive and simple diagnostic tools, we looked towards mobile apps and websites as many people use cell phones and can easily access such information. We also looked at 3D printing for quick and easy prototyping because 3D printing has so much potential in designing and manufacturing ideas. When I heard about DIY Diagnostics, I was so impressed and excited about potentially becoming apart of it. It was my first choice out of all of the other FRI streams and was so happy I was sorted into it.

One of the things we are known for is developing a diagnostic tool that could detect the Zika virus in mosquitoes. Our stream was so cool because we were on the news! This got me excited about being able to study diseases and illnesses such as Malaria and Alzheimer’s Disease and then potentially creating a tool that could detect and diagnose them.

I found learning how to code in web-based languages to program mobile apps one of the most interesting and exciting assignments during the first semester. I was so confused and clueless on what I was doing half the time and got very frustrated when my code didn’t work. Our first task was the simple and easy “Hello World” introductory assignment. I spent an hour writing random comments, submitting useless commits, and sending my link to my older siblings because I was so proud I got “Hello World! This is Maria Nguyen! DIY Diagnostics rocks!” to pop up on my screen. Looking back, I now understand why my brother laughed when he opened my link to find my “Hello World” assignment because it was so basic! Anyways, getting your code to work is SO satisfying.

Some things that I have learned from being in DIY is the importance of making a resource accessible, affordable, and simple for people to use. I love the idea of using technological advances (e.g. 3D printing) to further future scientific discoveries. Being in DIY has been such an amazing experience as I have also met many of my friends. Oh also, we get to play with LEGOS, and who doesn’t want to do that?! 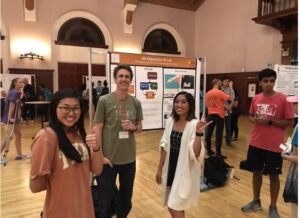