I always knew that I wanted to join a research lab as early as possible, however, I felt that with no experience, I would not be accepted for many positions that require knowledge of basic techniques. However, through the ARI program, I was able to join an unexpected stream that I had little knowledge about right after my freshman year. I felt that a wet-lab-focused research stream would suit me best as I would gain experience in elementary lab techniques and analysis needed to join larger neuro-related labs. The free-inquiry nature of DIY Diagnostics somewhat concerned me because I felt I would not figure out how to move forward or ask the right questions. I couldn’t be more wrong.

This past summer I was introduced to a project that started and ended with previous members of the laboratory. The premise of the project was to create a health diagnostic using keyboarding as an assessment of the progression of Parkinson’s disease in patients. Ultimately, it would be an inexpensive, universal replacement to the handwriting test that physicians have been using for years. There were no protocols to follow, and no set procedures I could read and repeat. Nonetheless, I loved how I had the power to pursue any question I felt was worth asking! Using a developed keylogging program called InputLog, we asked our labmates to copy a randomized paragraph multiple times to record and analyze their “typing behavior.” In other words, we wanted to distinguish an individual’s speed and accuracy from another individual’s just through their typing. We created daily and weekly surveys, which covered basic questions such as sleep and hunger and more complex questions such as positive outlook and well-being. So far, we have measured and analyzed to widely-studied variables, labelled “action time” and “pause time,” which represent the time it to press one key down and up and the time it takes to press one key down to the next key down, respectively. By logging our labmates multiple times, we have been find that individuals cluster in their own unique space when plotting pause vs. action times. Our goal would be to find different variables such as loud music or gloves to see how that affects each and every individual’s typing behavior.

Through the DIY stream, I’ve learned how to become an independent researcher, asking the questions myself and not being afraid of finding dead-ends. I gained coding experience in a powerful statistical language used for analysis of data, and I’ve learned about various studies in the field of “keystroke dynamics.” While I understand that this project will last for months and contain countless logging sessions with various individuals across Austin, I’m excited to see where this project leads us. Thank you to Dr. Riedel, the DIY Diagnostics stream, and ARI for allowing me to grow as a new researcher, and to allow me to research in a field I am very passionate about. 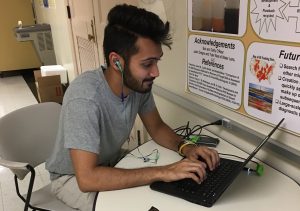